A community pub near Kentish Town West Station has won North London CAMRA's 2013 Pub of the Year Award beating hundreds of other pubs to the title.

Pubs in Kentish Town have monopolised the title over the last three years. The 2011 Award was won by the Southampton Arms in Highgate Road and in 2012, it was won by the Pineapple in Leverton Street.

Tapping the Admiral (which is owned by the same people who own the Pineapple) has ensured that the Pub of the Year remains in Kentish Town.

Catherine Tonry, CAMRA North London's Chairman, said 'This is an amazing result. Tapping the Admiral has prided itself on good beer since it opened. Its winning proves what a fantastic area Kentish Town is to visit for good real ale and excellent pubs'. 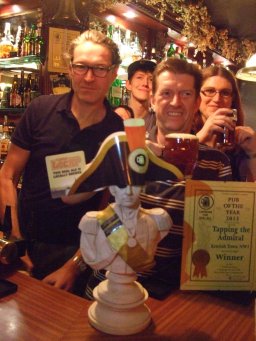 The Tapping the Admiral was built in the 1850s and was called the Trafalgar to commemorate the fact that Nelson's uncle lived nearby. The pub has a single bar, boasting eight handpumps selling mostly beers from small breweries including at least two from a London brewer. It also sells real cider and occasionally the rarer perry (like cider but made from pears) and an excellent range of British bottled beers. There is a range of reasonably priced foods, often sourcing ingredients locally.

Catherine also commented 'This is very much a locals' pub but with a very warm welcome to all visitors. When the weather is nice, and we do hope we will get some soon, there is a garden where drinkers can enjoy the sunshine, so we hope that people will come along and enjoy North London's Pub of the Year'.

The energy of the team running the Snooty Fox in Canonbury N5 has led to it winning the runners' up place in the CAMRA North London Pub of the Year for the second year running.

Catherine Tonry, CAMRA's North London Branch Chairman, said "The current licensees have only been in since 2010 and it's been great to see how this pub has developed in such a short period of time. It is a member of CAMRA's LocAle scheme, serving a great range of real ales including beers from local breweries, reducing the carbon footprint. The pub was listed in CAMRA's Good Beer Guide for the first time ever in the 2013 edition and was runner up in North London's Pub of the Year Competition in 2012. To make it to second place two years running, beating hundreds of other pubs is phenomenal and reflects the commitment to good quality beer".

The pub has low lights and candles and the sofas, unmatched tables and chairs gives the pub a warm feel. there are lots of pictures and posters of 60s icons, many in atmospheric black and white, although it is doubtful if many (indeed any) frequented this pub in that era. A vinyl jukebox has a retro selection with four plays for £1. At times DJs play mostly 50s and 60s music. There is outside bench seating.