The Southampton Arms in Kentish Town has won North London’s Cider Pub of the Year after many years of being shortlisted in the competition.

John Cryne, North London's Branch Chairman said ‘The Award is determined by CAMRA members voting for a short list of pubs selling real cider in North London. The Southampton has appeared on the short list on numerous occasions over the last few years but has not quite got there so it’s great for the pub and their hard work that it has finally won'. 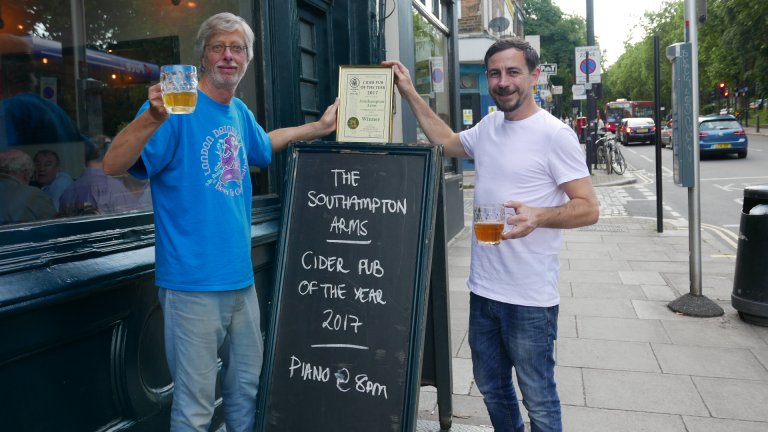 John then added 'The pub stocks up to eight real ciders. Real cider is growing in interest, particularly amongst younger drinkers and people are becoming more discerning, looking for a drink with lots of flavour. Real cider meets that criterion in spades. We are seeing an increasing number of pubs within North London selling cider so for the Southampton to win, it had to beat an increasing number of competitors’.

The Southampton Arms is a traditional ale house with an old wooden bar, with the walls adorned with old memorabilia. The main thrust of this pub is conversation and good cider (and beer) and the set up of tables makes it almost impossible not to make new acquaintances. It attracts people from all walks of life; from students to grandparents, all are welcome.

Peter Holt, the driver behind the Southampton, wanted a different pub, downplaying the spirits, lager and wine to concentrate on real ales and ciders from small independent producers. They also wanted the food to complement the pub and came up with the memorable description of their pub: ‘Ale, Cider, Meat’.

The manager, Ashton Millard, has been with the pub since its re-opening. Before this he was a songwriter, writing for singers such as Kylie and Jessie James. Ashton said ‘I treat the pub as my sitting room and our customers are guests in my house. I like entertaining people and we strive to be the best we can. We know that it is a very competitive market and this award is a real recognition of our efforts. Everyone who works here is trained and, to help on the beer side, we send everyone down to our brewery, Howling Hops, to find out a bit more about how beer is brewed’.

The music played is from vinyl but there is also live piano music on Sundays and Tuesdays and Wednesdays and a pub quiz Monday.

If you would like to see what the fuss is about, you can find the Southampton Arms at 139 Highgate Road, NW5 1LE, a 10 minute walk up the hill from Kentish Town Station. The Award was presented to the pub on Tuesday 30th May.

5. The pub has been an inspiration for others. Paul Gray, who was a regular drinker there, decided to set up his own version in Bournemouth, called the Firkin Shed.