The Southampton Arms in Kentish Town has won North London’s Cider Pub of the Year competition for the fourth time and the Tapping the Admiral (just down the road) has received the runner up award. 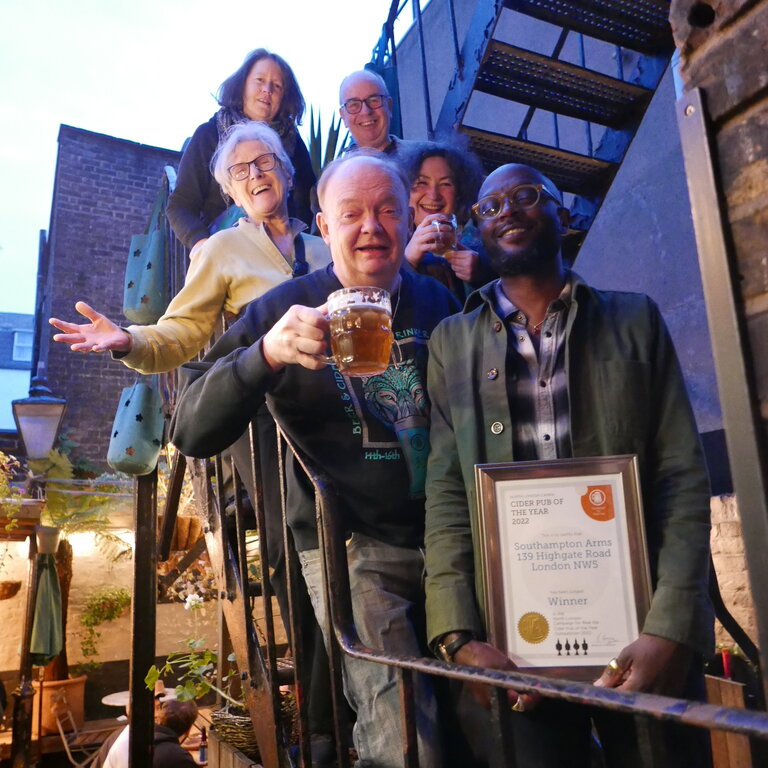 Colin Coyne, North London's Branch Chairman said “The Award is determined by CAMRA members voting for a short list of pubs selling real cider in North London. The Southampton has appeared on the short list on numerous occasions and has now won it for a fourth time reflecting its commitment to good traditional cider”.

Colin then added “It’s very unusual to have two pubs near each other selling real cider so we were delighted when another Kentish Town pub, Tapping the Admiral, came a close second in the voting. There is no doubt that Kentish Town really is the place to come for people with discerning palates looking for excellent cider from independent producers”.

Nick, the manager of the Southampton Arms, said “We are delighted, honoured and humbled to win best pub but a pub is only as good as the people who drink in it. So lashings of thank you to all our lovely punters. We would be nothing without you”.

The Southampton Arms is a traditional ale house with an old wooden bar, with the walls adorned with old memorabilia. The main thrust of this pub is conversation and good cider (and beer) and the set up of tables makes it almost impossible not to make new acquaintances. It attracts people from all walks of life; from students to grandparents, all are welcome.

Peter Holt, the driver behind the Southampton, wanted a different pub, downplaying the spirits, lager and wine to concentrate on real ales and ciders from small independent producers. He also wanted the food to complement the pub and came up with the memorable description of their pub: ‘Ale, Cider, Meat’. No gastro dishes, just good bar snacks, pork pies, sausage rolls, scotch eggs, roast pork in baps plus veggie options.

The Tapping the Admiral is another traditional pub with a similar ethos of welcoming all. Resuscitated after being closed for a number of years (it had only a partial ceiling), it reopened in 2011 and went on to win CAMRA North London’s Pub of the Year three times but this is its first award for cider.